Memorise: And that servant, which knew his lord’s will, and prepared not himself, neither did according to his will, shall be beaten with many stripes. Luke 12:47

25:25 And I was afraid, and went and hid thy talent in the earth: lo, there thou hast that is thine.

25:26 His lord answered and said unto him, Thou wicked and slothful servant, thou knewest that I reap where I sowed not, and gather where I have not strawed:

25:27 Thou oughtest therefore to have put my money to the exchangers, and then at my coming I should have received mine own with usury.

25:28 Take therefore the talent from him, and give it unto him which hath ten talents.

25:29 For unto every one that hath shall be given, and he shall have abundance: but from him that hath not shall be taken away even that which he hath.

25:30 And cast ye the unprofitable servant into outer darkness: there shall be weeping and gnashing of teeth.

An unprofitable servant is generally identified as a steward that fails to put his or her talents to profitable use for his or her master. He or she is a wasteful person who is pleased to keep the master’s investment from yielding any profit.  Among all the servants mentioned in the Bible, it was only the unprofitable servant that had the disrespectful behaviour of complaining and bringing charges against his lord. He had the audacity to accuse his master to his face of being a difficult and greedy person, wanting to reap where he did not sow! He created the impression that his master had all along been wicked, unfair and insensitive. Although the unprofitable servant tried to portray himself as a humble and obedient servant, he ended up giving himself off as a self-righteous person, who had mastered the art of making excuses to cover up for slothfulness and failure. Trying to justify himself, he falsely argued that he became indolent and unproductive out of fear for his master. He forgot that a master’s commandment is a servant’s duty. As a master of fact, a servant always owes a debt of service to his or her master (Luke 17:7-10). The unprofitable servant tried so hard to justify himself but he failed woefully. God is not mocked; the excuses you have prepared to use on the Day of Judgment will not stand the rest of His scrutiny.

Brethren, every excuse that we give for failure to obey the commandments of God with regards to the use of our talents is simply evidence of rebellion against God. The excuse that the unprofitable servant gave is the command plea of many Christians today, who complain that the Almighty God has no right to demand for the use of their time, money and ability for the promotion of His kingdom. If you fail to put your God-given talents to profitable use, on the day of reckoning, you will hear the denunciation pronounced against the unprofitable servant: “Take therefore the talent from him!” I pray that you will never receive words of condemnation from God in Jesus’ Name. Many would ask, “What wrong have I done?” Search your heart. Have you fixed your Lord’s money in huge deposits and savings accounts, or tied up his investments in properties, exotic cars, exclusive furniture and an expensive lifestyle, all the while leaving souls to perish in their sins? Do you prefer to bury your talents out of selfishness because you care more about yourself and less about God and the expansion of His kingdom? Have you deliberately refused to put God’s endowments in your life to profitable use; thereby causing the benefits and profits due to God and man to be totally lost? To be commended by the Master, we need to repent of our selfish lifestyle and yield to God in complete obedience.

Prayer point: Father, please give me the grace to serve You profitably to the end in Jesus’ Name.

Open Heaven Daily Devotional, written by Pastor E.A Adeboye, The General Overseer of the Redeemed Christian Church of God, one of the largest evangelical church in the world and also the President of Christ the Redeemer’s Ministries.

iOpenHeavens is the electronic version of the Hard Copy. The Open Heavens devotional application is available across all mobile platforms and operating systems: iOS, Android, Blackberry, Nokia, Windows Mobile and PC. 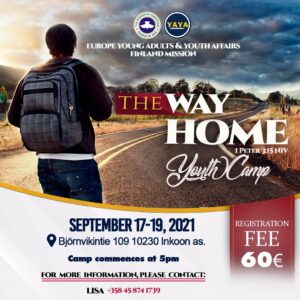 Topic: BUILDERS FOR GOD  Memorise: Therefore, my beloved brethren, be ye stedfast, unmoveable, always abounding in the work of the Lord, forasmuch as ye know that your labour is not in vain in the Lord. 1st Corinthians Read more…

Topic: THE CHURCH OF GOD III  Memorise: That he might present it to himself a glorious church, not having spot, or wrinkle, or any such thing; but that it should be holy and without blemish. Ephesians 5:27 Read more…